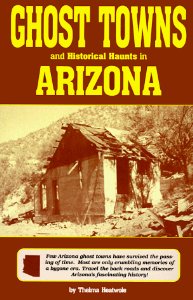 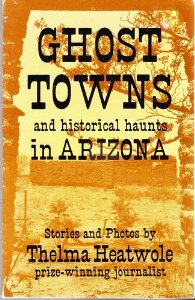 About the Author
An adventuresome spirit, Thelma Renick Heatwole rode camels, soared in turbo jets, hovered in helicopters, interviewed generals and spent the better part of her life as a reporter-photographer. Plane wrecks, drownings, traffic fatalities, strong-arm robberies, murders her stories and photographs appeared in the pages of The Arizona Republic and The Phoenix Gazette. As an exercise in irony, she even covered the story when her own teenage son was lost overnight in the mountains a harrowing episode.Thelma began her journalistic career as a reporter with The Glendale Herald. Next, she became a stringer for the Gazette, and then for the Republic. In 1962 she was a full staffer for the Republic. Her news beat covered eight cities plus a military base in western Maricopa County.Passionately enthusiastic about Arizona history, she developed a particular fascination for Arizona ghost towns. In her inimitable intimate style, she captivated the public with her tales and photos of these historical places of Arizona s yesteryear.Over 100 communications awards were bestowed on her during her journalistic career, including being Woman of the Year 1979 1980 by Arizona Press Women, Inc. Among her National Federation of Press Women awards was a first place for both feature and editorial categories, a second place for news story in a magazine and third place for travel photography.Plaques for her outstanding service as a newspaper reporter were presented by The Arizona Press Club, the City of Tolleson, the Glendale Chamber of Commerce, Glendale YMCA and Glendale Union High School District Board.Charter member of Arizona Press Women, she served as president in 1967 1968, as chairman of the Central District for two terms and as state communications contest chairman. She inaugurated a contest for press women in which stories about teenage accomplishments were recognized.A near-native of Glendale, Arizona, she was married to Don Heatwole, a fire chief of that city for nearly a quarter-century. Her dad was mayor of Glendale for a decade. Sons Bruce (high school teacher and member of Glendale s city council) and David (geological engineer in Alaska), remember their mother s peregrinations even as youngsters.Thelma was a member of both the Glendale Historical Society and the Arizona Historical Society. Though Thelma has passed on, these stories of her travels throughout Arizona are timeless in their simplicity and enthusiasm for a time long ago, but not forgotten.